The trip to Wayusentsa took about two hours by boat up the Capahuari River. On the trip we enjoyed the coolness of the air over the river. We were able to identify some birds flying overhead, such as Toucan, and had a nice sighting of a heron and a cattle crane perched on branches that were partially submerged in the river. Also we saw many Hoazin families that nest in the overhanging bushes. It was a pleasant, sunny day. We pulled in along side a canoe to anchor and disembark. The shore was narrow but not too muddy. We were wearing our “wellys”, so no problem. When hiking in the rainforest, sock and rubber boots are the preferred gear. There were toe holes and big steps cut into the bank. I had to have a hand up, it was quite steep. Once on top of the bank, we followed a trail through the underbrush, then through some cleared areas with chakras (gardens). We passed our first house, then on through the yard to the Shaman’s house. The Shaman was the designated community host for our visit. We were expected, if not, we would have called from the trail to let the community know that we were there and wait for an invitation to enter into the community. The Shaman invited us to enter and sit on the guest benches in the men’s part of the house. Each of the two wives began serving chicha, first to the Shaman as head of the house, then, one bowl at a time, to the rest of us. The Shaman gave the traditional greeting and welcome and asked us the purpose of our visit. Question and information was exchanged. Each of us was asked to give our name and background. I talked about the project I am working on and gave the Shaman a postcard and pin from Yuma. I also had pencils for his children, who were quite curious about us. We were a group made up of German visitors, Pedro, Vanessa, Ranon, Jorge, and myself. Ranon was our naturalist guide, Jorge our Achuar guide. After this visit, we were ready to start our trek to the waterfall. It was a hot humid day, and we were fasting in preparation for the evening natem ceremony. We boarded our boat to go further upriver to the trailhead. Here we hiked into the forest up hill part of the way. We stepped over fallen logs, were snagged by vines and crossed some muddy areas. One challenge was crossing over a small ravine. The “bridge’ consisted of two poles going from bank to bank. For a handhold, there was another log stuck upright into the streambed. This was held as you crossed, it could be pivoted as you made your was across. At leas the poses were not slippery.  I think we hiked about two hours; I do not wear a watch here. A deer was spotted, but was too quick for me to see. We saw a scarlet-headed woodpecker and butterflies. Then we arrived at the falls. We crossed over the rocky top of the falls. The stream is low since this is the dry season. After crossing the top, we could walk down to the riverbed to the falls. I did not feel like climbing down, I was exhausted! What kept me going were some ginger candies that Patrick had given me in Yuma. Some of the group did stand under the waterfall. It was a beautiful place to rest. Then for the trek back to the Capahuaori River. It seems a lot farther. Actually it was because we lost the trail. The guides used machetes to cut some new train and we backtracked. I managed to fall once, but no real damage. I was extremely happy to see the river! Then it was back for an afternoon of rest at the community.
Posted by JoAnne Mowczko at 4:08 PM 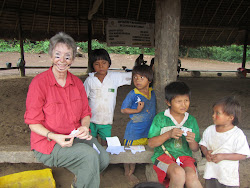 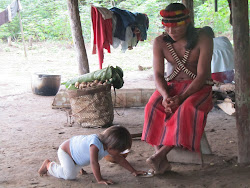 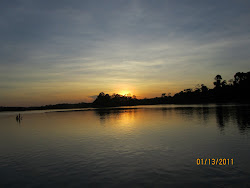 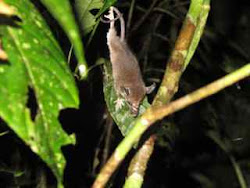 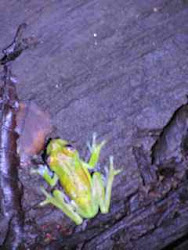 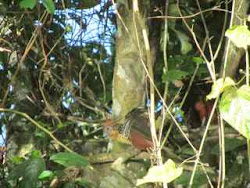 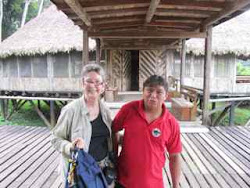 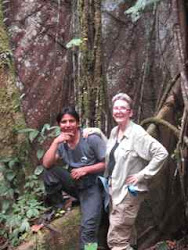 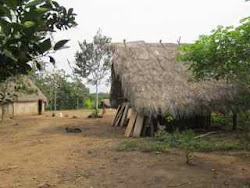 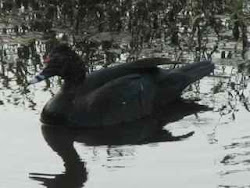